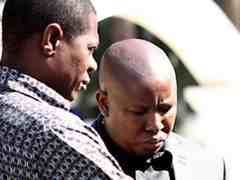 GUEST OPED: Vusi Gumbi and Malaika Mahlatsi argue that a partnership between the EFF and the ANC would not only benefit both parties, it might rewrite South Africa’s future.

According to the EFF, the meeting discussed political dynamics in KZN and in particular, the state of municipalities in the province.

The meeting followed a statement made by EFF leader, Julius Malema, that his party was willing to work with the ANC under the leadership of current Treasurer General and deputy president candidate, Paul Mashatile.

Some sections of society believe that the meeting sought to do nothing more than set parameters for an opportunistic partnership between the two parties ahead of the 2024 general election, while others believe that it is the beginning of a necessary coalition of the two parties.

But the two are not necessarily exclusive.

Electoral politics is fundamentally a contestation for state power – something which both parties are invested in.

The ANC recognises that its haemorrhaging of electoral support threatens its hold on state power, while the EFF recognises its own limitations with governing the country, given its stagnant electoral performance that has not breached the 15% share of votes.

A partnership between the two is thus aimed at securing their own interests, which may be deemed opportunistic.

But that it is opportunistic does not make it any less necessary.

An EFF-ANC partnership is not only logical, but some may even argue that it is inevitable.

The strategic objective of the ANC is to achieve a national democratic society which it describes as being brought about by overcoming the three antagonistic and interconnected contradictions of class, race, and patriarchal relations.

This does not in any way contradict the strategic objectives of the EFF, at the heart of which is to “pursue the struggle for economic emancipation”.

Both parties regard black people in general and Africans in particular as the motive force of the revolution.

They recognise that almost three decades since the ushering in of a democratic dispensation, the social and economic structure of South Africa has remained the same, with the black majority still on the receiving end of poverty, unemployment and structural inequalities, while privilege and upward mobility continue to have a white face.

The social and economic transformation of South Africa would benefit the same groups of people that both the EFF and ANC claim to represent: the oppressed black majority, workers, the unemployed, rural populations, women and the youth.

The commonalities between the two parties do not negate their areas of divergence, some of which are fundamental.

For one thing, the parties have a different approach to the very critical question of land and agrarian reform in South Africa.

The EFF supports expropriation without compensation and nationalisation. Furthermore, it believes that the state must be the sole custodian of all land.

This is in contrast to the ANC which supports expropriation with compensation and the maintaining of individual property rights.

But the fact that nationalisation and expropriation without compensation are resolutions of the 54th National Conference of the ANC means that a significant number of ANC branches are in fact in agreement with the EFF on this issue.

As such, there is room for the two parties to find common ground – on this and other issues.

The reality of the situation is that the epoch of a dominant party-political system in South Africa has passed.

South African voters are beginning to recognise the many dangers that an electorally hegemonic ANC poses for the country.

The ANC having complete control in all tiers of government is not ideal. A multi-party political system allows for more effective oversight and accountability, particularly in local government.

In his book titled Future Realities of Coalitions in South Africa, former Ekurhuleni mayor and current ANC Ekurhuleni regional chairperson, Mzwandile Masina, argues that because a future defined by coalitions is inevitable, the ANC needs to identify and work with parties that are more closely aligned to it ideologically. He identifies the EFF, the Pan Africanist Congress of Azania and other left-leaning formations as such parties.

Coalitions and partnerships can only be stable when there’s some ideological convergence, and the instability of Democratic Alliance-led coalitions that are in partnership with the EFF is the evidence. The two parties are polar opposites in every sense of the word. This is not the case for the EFF and the ANC.

A partnership between the two parties might prove to be beneficial for both of them – and might rewrite South Africa’s future – for better or worse.

*Gumbi and Mahlatsi are researchers at the Institute for Pan African Thought and Conversation,