At last! Misuzulu to be officially crowned King of the Zulus 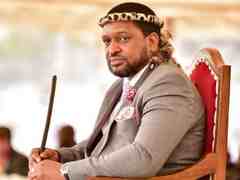 The venue for the historic coronation of the next Zulu king has been announced as the Moses Mabhida Stadium in Durban.

The announcement was made by the Zulu traditional Prime Minister Prince Mangosuthu Buthelezi on Thursday.

Buthelezi said the coronation was planned to take place at the eNyokeni royal palace, site of the annual reed dance.

“The king and the royal family expressed the issue of the lack of accommodation in Nongoma. Then Moses Mabhida was declared as the venue where the coronation of the king will be held on a date that is yet to be announced,” said Buthelezi.

He revealed that on 20 August 2022 king Misuzulu kaZwelithini will officially enter the kraal as part of the tradition to prepare for the coronation.

“The kraal ceremony will be held on the 20th of August at KwaKhangelamankengana royal palace in Nongoma. The Amakhosi, royal family members and everyone is invited to attend this historic ceremony,” said Buthelezi.

He added that the Moses Mabhida coronation ceremony is where President Cyril Ramaphosa will ceremonially hand over the certificate to declare Misuzulu kaZwelithini as the King of the Zulu nation.

Scrolla.Africa understands that king Misuzulu suggested 23 September to coincide with the commemoration of King Shaka’s Day.

Historically Moses Mabhida Stadium is a few kilometres from the home of King Shaka kaSenzangakhona which is known as kwaKhangela (Congella) in uMbilo where the King Edward Hospital is built.

Attempts to block king Misuzulu’s ascension to the Zulu throne have been thwarted more than three times at the Pietermaritzburg High Court and the Gauteng High Court in Pretoria.

The coronation will be observed by millions of people for the first time after almost 50 years since the coronation of the late King Zwelithini KaBhekuzulu in 1971.

King Misuzulu will officially lead the great Zulu nation of more than 15 million with his annual budget of more than R60 million.