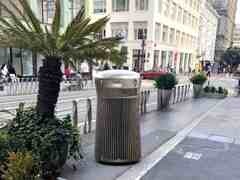 San Francisco, USA, has many attractions that draw tourists – but their rubbish bin tour is causing a big stink.

The city has the Golden Gate Bridge and the famous cable cars that travel uphill streets but there is a very different tour that is picking up steam.

The rubbish bin tour of the city is the next big attraction as the city attempts to create the best bins in the world.

The city claims the existing rubbish bins are no longer fit for use. City officials have placed three prototypes around the city and asked people to visit the bins and provide feedback.

At the end of the year officials will analyse the feedback and decide whether or not to replace the current bins with 3,000 of the newly designed ones.

In an obvious argument, the city has long battled homelessness and drug use and residents claim the money could be better spent on other projects.

The prototypes cost between R184,000 and R300,000 each. Each design is different with no real feature difference – they all just collect rubbish.

The feedback from visitors has not been too promising thus far with Barbara Jones saying “it’s ugly, it looks like a space capsule,” as per The Times.

Another visitor Nikolai Sheikman said the rubbish bin was kind of cool but leaders in the area should rather focus on more pressing concerns.