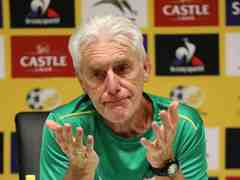 The 70-year-old manager seems to have stepped on Jordaan’s toes with his remarks, saying Safa lacked professionalism which makes his job a lot more difficult.

“I have not seen those comments. I haven’t seen him to understand what he had to say. Our most successful team are our juniors. They qualified for the World Cups and Olympic

Games, so maybe he is talking about something else,” said Jordaan in the Daily Sun.

Broos may have a point however. Safa has not fully delivered what they promised him early this year about giving him top opponents – especially in friendly matches.

In June the Belgian had a go at local football, telling the media that the country lacks quality, which left many, including Jordaan, fuming.

The Safa president then promised to summon Broos to a special meeting on the matter.

“I will sit down and talk to him about his comments, because it’s important that these matters are dealt with by the organisation,” said Jordaan.

“So I am not in a position to comment on things that I have not heard or seen. But I will engage him on this matter.”

Broos is currently in camp with Bafana preparing their two upcoming friendlies against Sierra Leone and Botswana.

On Monday, however, they skipped their first training session with Safa failing to book Dobsonville Stadium for them – something that left Broos unhappy.

Bafana’s first international match after they last played in June against Morocco will be on Saturday against Sierra Leone.

They host Botswana at the same venue on Tuesday.