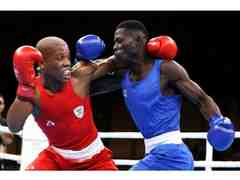 South Africa is guaranteed at least another medal at the Commonwealth Games after middleweight Simnikiwe Bongco survived an early knock-down to secure the country’s first podium at the event since 2014.

Bongco from the rural Duncan Village township in the Eastern Cape fought gallantly to bounce back and eventually dropped Kemrond Moses of Grenada during their three-round contest which he won by unanimous decision, with all five judges scoring it in his favour.

The victory now means Bongco advances to the semi-finals where he is guaranteed a bronze even if he loses. He faces Callum Peters of Australia on Saturday.

Bongco’s win will come as a relief to boxing enthusiasts after compatriot Amzolele Dyeyi opened the boxing events with a loss.

He lost a points decision against a vastly experienced Mohammed Husamddin from India three days ago. Husamddin is a 2019 Gold Coast and Commonwealth Games bronze medal winner.

Despite the setback Sanabo trainer Nathi Hlatshwayo has predicted a bright future for the Eastern Cape lad.

“It’s good that he faced a tough opponent. The loss will spur him to improve where he is leaking. Much as the loss is bad news, the boy is taking the loss on the chin. He will be our secret weapon in future international tournaments,” said Hlatshwayo.

The spotlight fell on Phiwokuhle Mnguni who stopped Sajeewani Muthuthanthri from Sri Lanka in the third round on Thursday.

Mnguni from Dundee in the KZN Midlands is the only female boxer in Team SA.