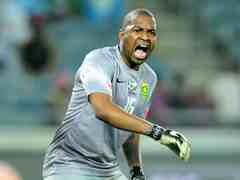 When Itumeleng Khune returned to the starting lineup last month at Kaizer Chiefs after more than a year, he also set his sights on making it back into the national team set-up.

The Amakhosi skipper’s plan has been to work extra hard this season as he believes that he still has a lot to offer Bafana Bafana.

However, his ambition to return to Bafana has been dashed by Hugo Broos who closed the doors on Khune.

Broos thinks Khune, at 35, is too old for Bafana and said he will no longer pick the goalkeeper to play in the future.

“I have known Khune a long time ago when I was Cameroon coach and he was the Bafana goalkeeper. He is a very good goalkeeper but you know my philosophy. I’m very sorry to say this but as he is 35 years old,” said Broos.

He snubbed the pair since taking over their reigns over a year ago claiming they are old.

Last week however Broos gave in to the critics and called Zwane to the squad that will be playing friendlies with Sierra Leone and Botswana. Broos was criticised by many who felt Zwane and Jali deserve to be in the national team as they were performing well for Masandawana.

Jali wasn’t called despite being on top of his game for Sundowns. Khune on the other hand has retained his captaincy at Chiefs this season and he looks in great shape.

“I’ve watched most Kaizer Chiefs games when he was playing. I can’t say he’s a bad goalkeeper now, but is he the future? If South Africa qualifies for the Afcon, he will be 37. I don’t dismiss his qualities, but not for me,” said Broos.

Khune was last called to the national team in November 2020 when Molefi Ntseki was Bafana coach.