Can Sundowns make 5 seasons in the sun? 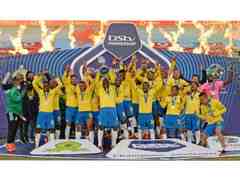 South African football fans have been waiting longingly for local football to start up once again – and that moment arrives this Friday.

It’s been two months of not watching their favourite teams battling for that all important premiership title.

The title has gone the way of Mamelodi Sundowns for the past four years and the big question is: can Sundowns continue their dominance in the new season and be the champions again come May?

And then the next question is who can stop them?

As it stands, Sundowns have no competition and are likely to lift the premiership trophy once again.

The Brazilians are already winners – especially in the transfer market. They have spent close to R100 million buying quality players that are capable of winning trophies with any team in the league.

Sundowns are also expected to dominate the individual awards again.

Can he do it again? The answer is, yes, he is likely to do so, especially with the quality players around him.

Who will face the drop this season you ask? Last season we saw Baroka get relegated while Chippa United survived the chop through relegation playoffs.

This time around Chippa could still find themselves in the same situation if their owner Siviwe “Chippa” Mpengesi doesn’t stop chopping and changing coaches.

TS Galaxy survived relegation last season and they could find themselves in deeper troubles if they don’t change their ways as well.

Newcomers are always seen as easy targets and this season Richards Bay FC are the newbies after winning the GladAfrica Championship. Can they spring a surprise and avoid relegation or better yet, find themselves finishing in the top eight?

Last season newbies Royal AM were a surprise package after finishing in the top eight and also earned themselves the CAF Confederation Cup spot at their first attempt.

Only time will tell. After all, each team has 30 league matches to play. So, let the games begin!