Can the All Blacks play without a coach? 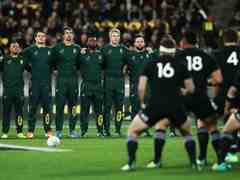 Never in the history of All Black rugby has a coach been more under siege than Ian Foster.

It is as bad as when Peter de Villiers was coach of the Springbok team during his three-year tenure starting in 2008.

As expected, New Zealand Rugby did not fire Foster before they came to South Africa, firing assistant coaches John Plumtree and Brad Mooar instead. When the All Blacks run onto the field at Mbombela Stadium on Saturday, Foster will be seen slinking into the coaches box.

Interestingly, Mark Robinson, the man responsible for appointing Foster in the first place, has received very little criticism. From the word go, the rugby experts have said (not in so many words) if you are looking for a guard dog, don’t get a Labrador and expect it to be an Alsatian, but nobody is calling for Robinson’s head.

Leadership is vital in any sport, but particularly in rugby and right now New Zealand are up the creek without a coach. Timid coaches are no good, intimidated coaches are a disaster.

If one problem has to be highlighted for the Springbok team, it is at flyhalf. Pollard played a much better game in the final match against Wales than he did before, but he is still not at his best when it comes to decision making from the set pieces. He still can’t get the Springbok centres, great as they are, into space.

Mercifully, the team announced by Springbok coach Jacques Nienaber does not contain the name of Elton Jantjies. He is not even on the bench.

But there is no specialist flyhalf on the bench. If Pollard comes off the field, the backline will have to be juggled around and probably Damian Willemse will have to step up once again. Willemse has performed very well (remarkably well!) up until now, but he must be feeling the pressure.

Willie le Roux will come on as fullback at some stage and that doesn’t seem to be a bad thing at the moment.

An interesting contest. Ian Foster is so neutralised that the All Blacks are virtually playing without a coach, and Handré Pollard is doing the job as no 10, but not particularly well as flyhalf.

By contrast, two of the great flyhalves in world rugby, Beauden Barrett and Richie Mo’unga are available for the All Blacks and Aaron Smith will probably be at scrumhalf. It doesn’t come much better than that.

But even the great halfbacks need a dominant pack and that will be quite a tall order for New Zealand.

Does Faf de Klerk’s return to the run-on side mean we can expect an endless string of box kicks? Not necessarily. Perhaps De Klerk will get different orders and he has all the skills to do it.

And there is one more challenge for the Boks. No matter how many times they say they are not underestimating their opponents, by the time the weekend comes around, overconfidence will be an issue.

A very difficult game to call.