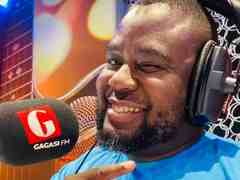 Gagasi FM DJ and comedian Felix Hlophe was suspended from the station after arriving at work late.

His suspension came after he posted a video on social media urging workers to dodge work and get on with the booze.

When news of his suspension was confirmed the joke was on him as people on social media took potshots at him.

Now the likeable multi-talented Hlophe says his suspension will form part of his jokes when he performs at the 100% Zulu Comedy Heritage Edition at the Golden Horse Casino in Pietermaritzburg on Friday afternoon.

The breakfast show host promised the audience to expect a night of hilarious punchlines.

“People must come in numbers to de-stress. They will laugh their lungs out because I have prepared some stuff for them that they have never heard before,” said Hlophe.

“Of course I will touch on my suspension at Gagasi just to give people a different perspective of what really happened.”

Organiser Zazi Nxele said: “We are hosting this event as part of Heritage month celebration and bringing the old glory days of Zulu Comedy to Pietermaritzburg,” said Nxele, adding that the show has an age restriction of 16 and that tickets are available at Computickets or Shoprite Checkers.

Gates will open at 4pm and the show will start at 6pm.