England down and out 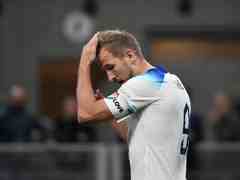 England’s national team have been relegated from the top division the Uefa Nations League after a 1-0 defeat to Italy in Milan this evening.

The Azzurri looked dangerous from the onset, closing Gareth Southgate’s side down to restrict them in front of goal and creating more on the counter in the opening exchanges.

Both sides failed to test the respective goalkeepers, however, with Nick Pope particularly having little to do initially despite Italy’s dominance.

The breakthrough came after the hour mark, though, with Giacomo Raspadori getting the only goal of the game after neatly controlling a ball from Leonardo Bonucci to put it brilliantly past Pope.

The visitors had more of the ball, but looked poor in front of goal. Their streak of no goals from open play in the tournament now extends to five goals, with Harry Kane scoring their only goal in a spot kick.

England’s best chance of the game came in second half stoppage time, with Jude Bellingham sending his header inches over the bar moments before the final whistle.

Meanwhile, Hungary shocked Germany 1-0 to stay the surprise leaders of the group, with their game against Italy on Monday deciding the group winners.

Germany’s trip to Wembley will be a dead rubber affair, with the Three Lions now having to play in the second tier of the tournament next season for the first time .