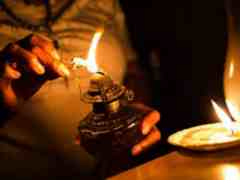 Parts of Khayelitsha township have been left in the dark after Eskom withdrew its services because gangs of criminals were demanding protection fees from its workers.

Sections of the Western Cape township have been without power since Sunday after the power utility removed its workers from the area.

Until recently, local gangs only targeted foreign shop owners for extortion, demanding regular payments in return for protection. If they refused, their businesses would be routinely smashed up and some owners were even shot dead.

One resident told Scrolla.Africa that they regret not doing more to stop the gangsters when they first began targeting spaza shops.

“We did nothing when the protection fee gang started collecting money from foreign nationals,” said the resident.

But in recent weeks the gangs have eyed a bigger catch, progressing from shaking down independent businesses to targeting South Africa’s public power utility.

Mbulelo Yedwa, an acting General Manager for Eskom, said gangsters have warned Eskom operators to pay a protection fee of R20,000 per month or else vacate the area. They also demanded the same price from their contractors working in Harare township.

“We have criminals tripping Eskom infrastructure and, in return, asking the community to pay an amount of R30 to reconnect them. Furthermore, it has come to our attention that there’s a syndicate illegally connecting people at an amount of R1,500 per household,” said Yedwa.

He said the services are straining the Eskom network, especially during peak times when transformers are overloaded.

“The safety of our employees cannot be compromised, and therefore Eskom has withdrawn services until the community leaders and the South African Police Service can guarantee that it is safe to return.”

Since Eskom has moved out of Khayelitsha, local residents have been without electricity.

Locals believe that SAPS is powerless in the face of such rife and open criminality.

“All we need in Khayelitsha is soldiers. SAPS members won’t do anything to these guys,” said the resident.