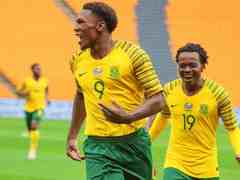 Bafana Bafana are preparing for their international friendly match against Sierra Leone on Saturday before they clash with Botswana three days later.

Coach Hugo Broos has 23 players in his camp ahead of the upcoming friendlies. As usual, the omission and inclusion of certain players sparked fierce debate.

Here are five players Broos might have also considered for selection.

He is playing at the highest level (French Ligue 1) of any other Bafana player and has returned to full fitness, featuring in Strasbourg’s last three games. This comes after he featured in 13 matches while on loan at Troyes last season which ended 673 days on the sidelines with a knee injury. The 26-year-old has been in France for the past eight years and boasts vast experience with Bafana.

A victim of Zwane’s tactical struggles at Chiefs, Dolly can’t have just become a bad player overnight and his qualities remain undoubted. The goal he scored against Maritzburg United in August was pure class. His Chiefs teammates Kgaolelo Sekgota and Ashley du Preez have not done anything outstanding to be selected for Bafana ahead of Dolly.

A veteran of several high-profile battles from his Orlando Pirates days to his time in Belgium and now especially in the CAF Champions League with Mamelodi Sundowns, Jali would bring much experience and leadership to this Bafana squad. Broos’ argument for ignoring 32-year-old Jali is the player’s age but the Belgian has always selected players older than Jali. Broos finally climbed down and succumbed to pressure and selected Themba Zwane but still overlooked Jali who is one of the captains at Sundowns.

He used to be a favourite of Broos but this time around he has surprisingly been omitted. A defensive linkman, Mvala has shown some versatility and is currently playing in central defence for Sundowns as they face a crisis at the back due to injuries. He might be 28-years-old but has a wealth of experience since the 2016 Rio Olympic Games.

Singh might have started playing in recent games for Chaves in the Portuguese Primeira Liga but he remains one of the better strikers Broos has at his disposal. He is better and has more experience than the likes of Zakhele Lepasa, Khanyisa Mayo, Sekgota and Mihlali Mayambela who the attackers are currently with Bafana. Singh has played just one game under Broos and at 25, he is the perfect age for the Belgian’s rebuilding project.