Girlfriend kills cop with his own gun 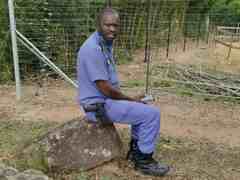 A woman accused of murdering a Mpumalanga police officer with his own service pistiol will appear in court on Friday.

The 29-year-old suspect, said to be the officer’s girlfriend, was arrested by police after being discovered hiding in Dayizenza on Wednesday.

The woman has been accused of murdering her police officer boyfriend Mandlenkosi “Happy” Thwala, who worked at Kabokweni Police Station in Mpumalanga.

The 45-year-old’s body was discovered in the bushes near his home in Gedlembane, Pienaar, Mpumalanga, by a neighbour.

Thwala was declared dead at the scene with two gunshot wounds to his head and three to his upper body.

Family representative, Phindile Mashaba, told Scrolla.Africa they are in shock as they mourn his death.

“We feel we are not being treated as human beings,” she said.

“Whoever is responsible for his death should be put in jail. My brother was a very humble person with a good sense of humour. He had a good relationship with people particularly in our community.”

Mashaba said they hoped justice will be served.

“My brother did not deserve to die like this with his body being dumped in the bushes. It’s heart-breaking for our family,” she said.

Lieutenant General Semakaleng Daphney Manamela, the Provincial Commissioner of the SAPS in Mpumalanga has expressed concern about the ongoing killing of SAPS members in Kabokweni.

“The perpetrators of this barbaric act should be punished before taking another life,” Semakaleng said.