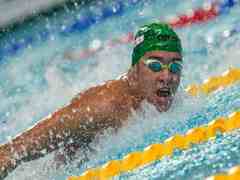 South Africa were due to compete in the men’s 4x100m medley relay final on Wednesday night but the bus broke down and one of the swimmers did not get to the pool in time.

Swimmers Michael Houlie, Andrew Ross, Guy Brooks and Clayton Jimmie were due to compete in the first of the two heats but one of them didn’t show up in time for the heat and South Africa could not compete.

Team South Africa said the swimmer was late due to a transport malfunction through no fault of his own and the team were forced to withdraw from the race, a representative told Sport24.

The organisation has decided to appeal the decision.

“Several other swimmers from other countries were also affected, but Team SA is appealing it,” the spokesperson said.

Heat one only saw four teams take to the pool with South Africa and Singapore missing out. The second heat saw the Seychelles missing out.

With Canada being disqualified in their heat, South Africa would have felt their chances of winning a medal were high.

When the final took place England emerged as winners, touching the finish wall ahead of Australia and Scotland.

It is impossible to know if South Africa would have won a medal, but the team feels hard done by for not getting the opportunity to even compete.

South Africa have seen the majority of its 20 medals come from the pool and the 4×100 medley relay would have been another real chance of increasing the medal tally.