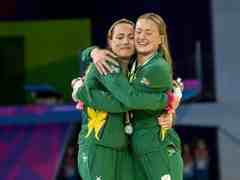 Lara van Niekerk claimed her second gold medal at the Commonwealth Games, an achievement she says she didn’t expect.

She also won South Africa’s first gold medal in the women’s 50m breaststroke in the opening weekend of the Games.

The 19-year-old touched the finish wall well ahead of the pack in the women’s 100m breaststroke on Tuesday night.

Van Niekerk led the race from the start and throughout the race looked as if nobody would come close to beating her, finishing with a time of 1:05.47.

But the one thing on her mind when she touched the wall was where her South African teammate Tatjana Schoenmaker finished.

“I thought it was going to come to the last split. That was what I was preparing for,” laughed Van Niekerk after the race.

“I didn’t expect to be in front. I thought it was going to come down to a touch so I was quite surprised and said, ‘Where’s Tatjana?’.”

Van Niekerk is still coming to terms with her achievement.

“I’m speechless. It doesn’t feel like I’m a double Commonwealth Games champion. I don’t think it’s ever going to sink in,” she said after her victory.

“I was happy after the world championships, and coming here and achieving this, means a lot.”

In true Schoenmaker fashion, she rushed over to congratulate Van Niekerk who said her teammate was an inspiration to her.

“She has always been a good role model over the years,” Van Niekerk said.

“Growing up, I’ve always been around her and saw how she missed out on the Olympic qualifier in 2016 and came back to be world record holder and Olympic gold medallist.”