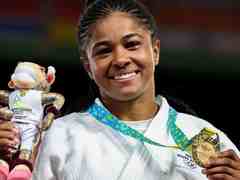 The president of Judo South Africa, Themba Hlasho, had no idea that his star judoka, Michaela Whitebooi, withdrew from the World Championships in Uzbekistan because of a lack of funds.

Whitebooi decided to skip the games because she did not receive funding, SABC reported.

“The cost of the trip is too much so I had to reconsider which competitions I would participate in. Instead of going to the world champs I can now do two competitions,” Whitebooi said.

The judoka, who grabbed a gold medal in the 48kg class at the Commonwealth Games, is one of the medal hopefuls for South Africa for the games that begin on 6 October.

Hlasho claimed the athlete never consulted him regarding this decision.

“This is the first time that I hear that Michaela is short of funds. She never told us anything,” said Hlasho.

“Judo is not a well-known sport in South Africa but we strive to ensure all athletes get to the tournament. We don’t have much money but we are always making plans to get athletes to compete against the best in the world.”

Hlasho said Whitebooi has a good relationship with the federation.

“She is a medal hopeful so it won’t make any sense not to arrange funds for her to represent the country. I’m quite disappointed she went to the media without engaging with us,” he said.

The 26-year-old Whitebooi from Gqeberha is one of the athletes that received a special invitation from the International Judo Federation (IJF) to attend a training camp in Hungary.

Hlasho said they are willing to assist an athlete to realise her dream.

“I’m waiting for Michaela to contact me. She has my number. Of course, we are willing to assist her with money to represent us,” Hlasho said.