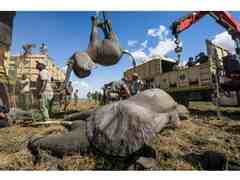 Around 263 elephants were given the ride of a lifetime as part of an ambitious plan to bring new life to a national park in Malawi that has been ravaged by poachers.

Hundreds of animals including impala, sable, buffalo, warthog and waterbuck were airlifted into trucks to be transported to the Kasungu National Park, according to The Times.

The elephants were thriving in the Liwonde National Park 400 km away but the population of 600 put the park in danger of being overwhelmed.

Moving the biggest land animal is no easy task. The average elephant weighs around six tonnes, making the task not only challenging but expensive.

Rope is tied under the sedated elephant’s “armpits” so that it is clear of the ribcage to ensure the animal can still breathe.

While it may look uncomfortable and unsafe, researchers found carrying the massive animals upside down is the safest method.

The position adds to the efficacy of the drug used to sedate them and also slightly improves their ability to breathe.

The method was adopted by the Malawian crew that moved the animals.

“We are overjoyed that the exercise has been completed successfully,” said Brighton Kumchedwa, Malawi’s director of national parks and wildlife.

The month-long operation was said to have cost around R30 million.

Poaching in the park has all but emptied the wildlife, with the population of elephants in the park now around 600.

A 50 km fence has been put up as an anti-poaching measure.

Residents of the nearby town of Kasungu hope the new lease of life for the animals attracts tourists that will in turn boost the economy.

“This will establish viable elephant populations, and ensure the prosperity of local communities living around the parks,” said Sam Kamoto, of African Parks, a conservation charity that backed the operation.

Malawi has around 2,000 elephants across the country, which is only half the amount they had during the 1980s.