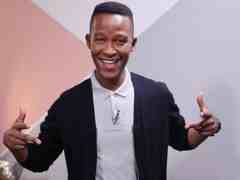 Katlego Maboe returns to the small screen on the Morning Expresso on Monday.

The presenter and singer was fired from the show in 2020 after a video of him was shared on social media where he confessed to have cheated on his now ex-wife, model Monique Muller.

Muller also claimed that she had been infected with a sexually transmitted disease.

After Muller, who has a four-year-old son with Maboe, publicly accused Maboe of cheating and abuse and got a protection order against him, he lost his presenting gig with SABC 3.

Maboe, who also lost his ambassadorship deal with OUTsurance denied the abuse allegation, but confessed to being unfaithful to Muller.

Now he’s back on the small screen, almost two years after he was dropped by the SABC.

It follows a two-year legal battle between the two parties which ended with the Muizenberg Magistrate’s Court ruling in favour of Maboe, clearing him of all abuse charges.

“Maboe was absolved by the Magistrate’s Court against the allegations of misconduct,” read a statement shared by Maboe on 31 January this year.

“There were no grounds for obtaining the protection order. Furthermore, the court has not made a finding of acts of domestic violence that were allegedly perpetrated against Ms Muller,” continued the statement, which was formally released by his publicist Lerato Maleswena.

Six months later the Morning Expresso announced they are bringing Maboe back to their Cape Town studios.

The Women for Change organisation has made it clear that they do not want Maboe back but the SABC has decided to bring the presenter back a day before Women’s Day.

Expresso Show wrote on Instagram Tuesday that Maboe would be back from Monday, 8 August from 6-9AM.

“#KatIsBack,” they wrote and shared a clip of the 35-year-old in the studio.

“I’m filled with so much gratitude for all those who have been supportive and encouraging me throughout this journey,” Maboe told SowetanLive.

“I’m looking forward to once again help an incredible team deliver an inspiring show to our people.”