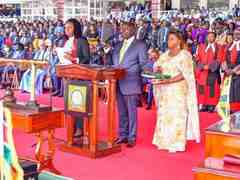 It should have been the crowning moment of his career thus far, but Rigathi Gachagua’s swearing in as Kenya’s deputy president was the stuff of nightmares.

Just moments after William Ruto was sworn in as Kenya’s fifth president on Tuesday, a nervous-looking Gachagua took the stand – and fumbled his way through his oath.

A crowd of thousands at the Moi International Sports Centre in Nairobi watched in horror as the country’s second most powerful person failed to repeat the words spoken by Chief Registrar of the Judiciary Anne Amadi.

It started off well enough:

“I Rigathi Gachagua,” he begins.

“Do swear,” the deputy president repeats.

“That I will always-”

Oh, no. Gachagua freezes. He looks over at Amadi desperately seeking assistance.

“Truly and diligently,” she repeats... but Gachagua stays silent, he looks helplessly at the papers below him. Something is wrong.

“Truly and diligently,” Amadi says for a third time. The crowd begins to laugh – some are whistling.

An aide rushes over to rearrange the papers.

“Truly and diligently!” Gachagua declares. He’s plucked the right note out of thin air and he’s back on track.

For some time it goes smoothly enough. He doesn’t look comfortable but he’s now at least saying the same words as Amadi.

“In the republic of Kenya,” Amadi says for him.

Silence. Gachagua’s mouth moves but nothing comes out.

“That I will diligently...” No! That won’t work this time.

“Serve the people,” Amadi begins to roll with it.

But Gachagua doesn’t get it: “Discharge my duties and perform my functions in the state office.”

Amadi’s had enough: “May I request that we take it again please.” But Gachagua doesn’t listen, he’s on a roll. “To the best of my judgement.” “I’m sorry, let’s take it again. Let’s take it again,” she insists. Gachagua gets the message, and they start again from the beginning.