Krugersdorp’s week of hell – a timeline 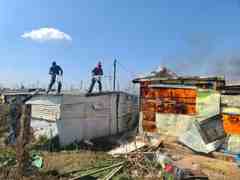 The gang rape of eight women working on a film crew at an abandoned mine last Thursday led first to one of the biggest police crackdowns in post-apartheid history. This in turn led to a violent pogrom of zamazamas by local residents in the area.

Here’s a timeline of events in Krugersdorp’s week of hell:

This is the first of several police crackdowns throughout the week.

Shots can be heard being fired in the abandoned mines as residents attempt to root out zamazamas.

By Thursday night, upwards of 200 men had been arrested.