Late Amapiano legends to be celebrated 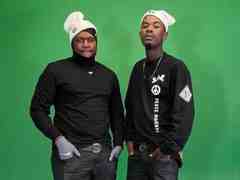 Family and friends of the late Killer Kau, Mpura, TD, The Voice and Thando Tot are planning a trip called The Big Five Link Up, where they will be remembered.

This weekend’s memorial services for the late amapiano artists will be held in Rustenburg and Soweto.

On Sunday, 7 August, exactly one year ago, the artists all perished together in the same accident.

After visiting the accident scene on the N4 (Rustenburg), the convoy will head to Westpark Cemetery and Nasrec Memorial Park in Johannesburg where the artists are buried. The Big Five Hangout in Pimville, Soweto, is the final destination.

The trip is a lead-up to a concert that will support the families.

Gugu Seitlhamo, one of the event’s organisers, told Scrolla.Africa that doing this is a part of upholding their legacies and providing for their family.

“We want to grow this into a benefit concert, where we host an event, and the proceeds go to the families and the families are also aware of everything. We were close to the guys to the level where we knew that they were breadwinners in their homes,” Seitlhamo said.

They wanted to do something that would leave a lasting impression.

“In most cases when celebs die, people forget that they were heroes and role models in their own right and had responsibilities, but we have not forgotten,” she said.

The event will occur every year since it also aims to ensure that the late artists are known by future generations.

Seitlhamo added that the amapiano artists need to be remembered and this is the perfect way of doing just that.

“They are legends, and they will go into history books so that they are remembered for generations to come,” the organiser said.

“When the funerals happened last year, not a lot of people could make it because of Covid regulations, but now they can come.”