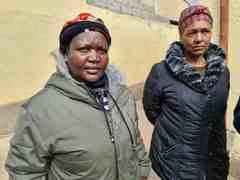 An unarmed 52-year-old man was shot dead by metro police during the violent ongoing protests in Tembisa township on Monday.

For two days violent unrest has rocked the Ekurhuleni township, with protesters clashing with police over rising electricity and water tariffs.

Linda Tshabala watched the chaos erupt from his yard opposite the Tembisa Community Civic Centre. He didn’t want to join the protests and opted instead to stay in his yard.

He didn’t know what else to do so he began to take pictures of the unrest on his cellphone.

A large group of protesters carrying sjamboks, spanners and other makeshift weapons chanted and moved through his street.

Tshabala watched in horror as the mob burned down the civic centre where for years residents across many other nearby townships like Ivory Park, Mayibuye and Rabie Ridge had received services.

He stood frozen with fear inside the yard where he was renting a room.

Soon afterwards, he watched metro police trying to disperse the crowd by firing rubber bullets at them.

One of the officers noticed Tshabala taking pictures on his phone, marched over and began shouting at him, demanding to know why he was taking pictures.

Then he raised his shotgun and shot Tshabala, killing him instantly.

Tshabala’s landlord Beverley Masinga said she was with him when the officer confronted them.

“The officer even pointed at me with his gun. I told him to shoot at me because I had not done anything wrong,” she told Scrolla.Africa.

Masinga said the image of Tshabala being shot dead has continued to play over in her mind all day.

“I cannot forget it. It is so traumatic for me and other family members who watched him die.” She said he had been staying at the yard for only three months.

“He was a good man and an elder to us in the family. We treated him as our big brother,” she said.

Tembisa was still tense on Tuesday. There was no free movement around the township with protesters regrouping and burning tyres across the different sections.

Motorists were blocked and turned away. Journalists were escorted by metro police to move around the township to cover the events.