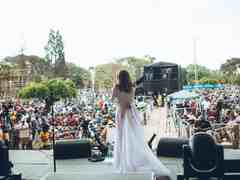 The Mangaung African Cultural Festival – better known as Macufe – is back after two long years away as an estimated 140,000 punters are set to gather in Bloemfontein.

The festival will run from 2 to 9 October with its traditional offerings: a gospel music show, comedy theatre, a film expo, football, boxing, a jazz festival and a hip hop music festival.

Macufe has taken a two-year hiatus during the Covid-19 pandemic.

There is already a buzz as the starting date is nearing, according to Limakatso Mahasa, Member of the Executive Council (MEC) for Sport, Arts, Culture and Recreation in the Free State.

“From the colourful streets to the beautifully crafted artworks and the soulful, melodic and rhythmic sounds to the vibrant and sporting personalities, the Free State capital of Bloemfontein is usually abuzz during the Macufe festival,” said Mahasa.

“We will again like to assure the patrons and stakeholders of Macufe that everything will be done for the successful delivery of this festival.”

The MEC added that in past years they would accommodate over 140,000 spectators coming to enjoy the music and sport.

The likes of Brandy, Tiwa Savage and Deborah Cox have in the past formed part of the divas festival segment.

Boxing promoter Lebo Mahoko of Dream Team Promotions confirmed he will stage two tournaments in one night as part of the festival at Pacofs.

Lerato Dlamini will be involved in an international 10-rounder against Jelbirt Gomera from the Philippines. Newly crowned SA middleweight champ John Bopape faces James Mbiya Kanku from the DRC for the ABU title.