MAYOR’S SNUB STOKES THE FLAMES OF UNREST IN TEMBISA 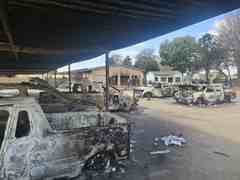 That morning, residents had piled into the Mehlareng Stadium, eagerly waiting to be addressed by the mayor, who was joined by Gauteng’s MEC for Human Settlements, Urban Planning and Cooperative Governance and Traditional Affairs, Lebohang Maile.

But the mayor – who arrived in the township to visit the family of someone who was killed in the protests – stuck to her initial plans to meet and address residents on Friday, and never stepped foot in the stadium.

MEC Maile addressed the angry crowd, breaking the news that the mayor had chosen not to address them. Afterwards, he swiftly left.

Outraged by her absence, residents left the stadium and set about closing off roads in different sections of the township making it impossible for motorists to move.

“There are groups of people in different sections of the township at the moment who are chatting struggle songs and closing roads with burning tyres and rocks.

“Police have maintained high visibility in the area and are monitoring the situation,” said Mashishi.

She said residents had an impression that they would be addressed by the mayor. When they heard that she would not be addressing them, unhappy residents took to the streets.

Speaking to the media outside the house of a man who was shot and killed allegedly by a metro police officer on Monday, MEC Maile called the officer “an animal” who needed to be taken out of society.

He denied that the unrest was politically influenced and deliberately orchestrated in order to destabilise the governing of the city in a DA-led coalition.

He said the man who was killed on Monday was not part of the protest. At the time he was shot, he was dressed in his usual attire as a welder, suggesting that he was busy with his work and was not a protester.

He also told journalists outside Mamnyane’s house that after the officer had shot the welder, he threatened the welder’s mother that he would run over her with his car.

“He was allegedly shot by a white officer who has no shame. The officer boldly declared that he indeed shot him. The same guy, we are told, nearly ran over the mother of the deceased,” said Maile.

Maile called for the police officer to be dealt with harshly if the allegations were true.

Speaking to the media, chairperson of the Tembisa community forum Zamani Sithole declared the protest was over.

When asked what if the residents would start protesting again, he said he cannot control the crowd.