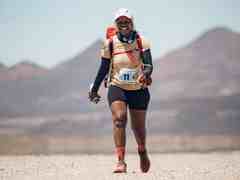 The gruelling 220km race is divided into seven stages, it started on Monday 19 September and ends on the 25th.

Mgabhi’s bigger goal is that each kilometre she runs in the South American desert will raise enough money to buy one pair of shoes and she aims to meet the target of providing shoes for 220 children.

The amount of money she is hoping to raise is R50,000 which she feels is enough to make a change in the lives of underprivileged kids.

This is not the first time Mgabhi has run for the greater good. She made history by becoming the first South African woman to run seven marathons in seven continents over seven consecutive days.

She managed to raise a whopping R1,6 million in order to build five classrooms, one administrator’s room and to repair some classrooms in Khuzimpi Primary School in her rural area of Mtubatuba near Richards Bay.

“I have raised over R10,000 so far through BackABuddy in order to make the child’s dream possible,” she said.

“We will be running over a period of seven days carrying all our clothing and food as the place is like a desert. There is no place to bathe or buy food, ” said Mgabhi upon her departure.

Mgabhi said she would be doubling the amount of money she raises.

The 35-year-old from Murray & Roberts running club has run in the desert before as she ran the Marathon des Sables in Morocco in October last year.

That race took place under scorching weather conditions which resulted in two participants losing their lives.