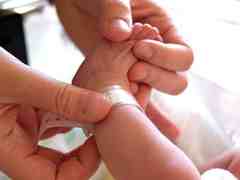 One year ago two mothers made the earth-shattering discovery that their babies had been mistakenly switched at the hospital soon after their births in 2008.

Now the mothers are in the tragic position of one wanting to keep the child she has raised for 14 years, and the other wanting to be reunited with her biological child.

To this day the mothers remain with each other’s child, with one of the mothers accusing the other of refusing to take her own biological child back because he is severely disabled.

One of the mothers from Khayelitsha in Cape Town told Scrolla.Africa she found out the boy she had raised for fourteen years was not hers when her ex demanded a DNA test.

She said the father denied the baby when she was still pregnant because he believed it was not possible for a woman to fall pregnant while breastfeeding. The couple had a two-year-old at the time.

She says she noticed her child was disabled when he was six months old and that he always cried and experienced seizures.

Then last year, the ex told her that the boy doesn’t share any family resemblance like his other kids and he asked for a DNA test.

“I didn’t have a problem with that but I had the shock of my life when they said he was not the biological father,” added the mother.

The former couple decided to do more tests together. This time, the DNA results showed that both the supposed mother and father were not biologically related to the boy.

“That’s when I knew there was a mix up at the hospital. The nurses took my child to bathe him and brought me a different baby. They probably did the same with the other mother,” she said.

She took the matter up with the Department of Health, who managed to trace their child’s biological mother.

When the mothers met, it became clear that they would not agree on how to proceed. One wanted to swap the children, while the other did not.

“She told me that she doesn’t want a disabled child. I love the child I raised but I also deserve to have my biological child back. Those nurses destroyed not only my life but those of the boys,” she added.

Scrolla.Africa could not get a response from the mother who wants to keep her non-biological child that she has raised.

“An investigation which included extensive counselling by a psychologist and a social worker, was started immediately,” said van der Heever.

One of the mothers claims that she has never received an apology from the department, and she is looking for a lawyer to help her seek damages for the upsetting ordeal.