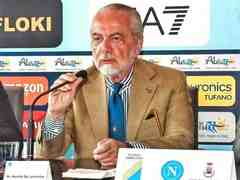 Napoli owner Aurelio De Laurentiis caused a stir on Wednesday that the club would not be signing any African players in the future unless they agree not to participate at the Africa Cup of Nations.

“They [must] sign a waiver giving up their right to participate [in] the Africa Cup of Nations (Afcon) tournaments or between Afcon and the championships in South America. I never have them [Napoli players] available,” De Laurentiis told Wall Street Italia.

His comments came after former club captain Kalidou Koulibaly and key player Andre Zambo Anguissa missed several games in January and February last season while away at the competition.

“But I respect what it is. If he thinks the team can play without African players, it’s up to him. Not everybody has the same idea as him in the club.”

De Laurentiis also expressed his love for the club and spoke about the excessive amount of matches being played in a season, claiming the game is being turned into a “puppet show”.

“The world of football cannot self-manage because we do the puppet show for others. If we could play 100 games, it would be a happy ending for everyone and we like cretins agree to that,” he said.