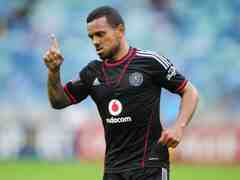 When the transfer window closes there’s always surprises that leave fans excited and others disappointed.

This year the Premier Soccer League (PSL) decided to extend the transfer closing date by three weeks. Normally it would be shut at midnight on the last day in August.

The 2022/23 season deadline day however was no different from the previous seasons as far as the surprises are concerned.

The 32-year-old rejoined the Buccaneers on a two-year contract. He spent three years at the Soweto giants between 2013 to 2016.

This signing is the biggest surprise considering that as much as Sundowns was willing to loan him out but they made it clear that not to their nemesis Pirates or Kaizer Chiefs.

The other player that the Bucs acquired for his services is Marumo Gallants Ndabayithethwa Ndlondlo on a three-year deal.

The midfielder’s signature was confirmed by the club hours before Erasmus returned. Both players left Chiefs supporters heart broken as they urged their club to sign them.

The duo were once quoted by other media houses saying they would like to join the Naturena-based club. However, Chiefs showed no interest as they said they were done signing players in this transfer window.

Will they leave to regret not signing them? Well the answer will be revealed when Chief’s face Pirates in a Soweto derby on 29 October.

Sundowns on the hand were also busy days before and on deadline day. They were offered by Cape Town City to sign Terrence Mashego.

Last week the defender signed a pre-contract with the Brazilians. In return Downs offloaded Lyle Lakay which was unveiled by City on Thursday afternoon.

On deadline day Masandawana also confirmed the arrival of the Moroccan defender Abdelmounaim Boutouil. The 24-year-old arrived at Sundowns early this week and penned a three-year deal with an option to renew for a further two years.

Downs, Pirates and City were the only teams that were busy on deadline day while others seemed comfortable with the players they signed during the off-season.