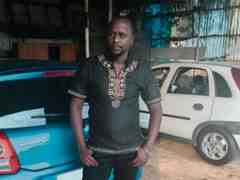 The suspect’s modus operandi is the same; they target single government employees, luring them with love before convincing them to take hefty loans and resign from their jobs before the swindlers then disappear with their pension funds.

The victim’s stories read like an agony column in a weekly magazine.

The duo’s latest victim is Ntshadi Msiza who is a teacher at a secondary school in Duduza.

She told Scrolla.Africa that she met her Somalian boyfriend in December at a grocery store in Nigel.

“He gave me the attention that I was craving for after I had been single for 14 years,” she said.

“He introduced me to his uncle where I was asked to join them in a small prayer room.

During the prayer I heard a faint male voice from a distance welcoming me to the family.”

The uncle allegedly asked her that at their next meeting she should bring coins worth R57 to unlock her wealth.

A day later he presented the money in the form of notes claiming it had multiplied to R1,000, which was divided between her and her boyfriend.

Nishida said weeks later the uncle advised the couple to take loans at the bank which would multiply to R12 million.

“He encouraged me to resign from work claiming that in their culture their wives don’t work. I was uncomfortable with this,” she said.

The supposed prophet uncle told her that they would add the money from her pension fund to the R250,000 that she already submitted and that after it was taken to the mountain for a week it would multiply to R12m.

“They have since stopped depositing the R10 000 monthly payments towards the loans and I’m stuck with the repayments,” she said.

Springs police spokesperson, Captain Johannes Ramphora confirmed that they are investigating cases of theft and fraud and investigations are underway.

Anyone with information about their whereabouts is urged to Springs SAPS on 011 365 5700,” he said.