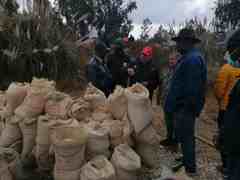 In another crackdown on illegal miners on Wednesday, police crawled through narrow holes to find them, used drones to chase them from the sky, and raided houses around Krugersdorp.

Multiple raids have followed the armed attack on a film crew by a group of around 20 armed men. Eight women on the film crew were gang raped they were robbed of 1.5 million worth of equipment.

The raids on zamazamas (illegal miners) on the West Rand continued on Wednesday, with the provincial police commissioner leading a massive operation.

Many illegal miners were arrested and their equipment seized and burnt.

While one group of zamazamas was being arrested on Wednesday, another group that was arrested over the weekend appeared in the Krugersdorp Magistrate’s Court.

All 60 suspects who appeared in court faced charges of being in the country without proper documentation. They were represented by legal aid in court and their cases were postponed until Wednesday next week .

The court has also found that many of the arrested suspects are minors. They have been moved to Juvenile Court where their cases will be heard.

The state will also be conducting age assessments on 15 of the suspects believed to be minors and checking whether they have criminal records.

Politicians have also jumped on the case.

ANC national spokesperson Pule Mabe led picketing outside Krugersdorp on Wednesday, supporting the women who had been sexually assaulted.

Mabe said it was time to crack down on criminals and give them no chance on the streets. “What happened in Krugersdorp over the past week should serve as a wake-up call.

“We need our government to ... work with speed to deal with these issues of zama zamas, illegal immigrants, and mining.” He said the government should make sure mining companies never leave mine dumps unrehabilitated.

Other political parties have been voicing their anger in regard to the heinous crimes that were committed.

The Economic Freedom Fighters called on the police minister to resign for failure to deal with crime in the country.

Crime activist and leader of Action Society Ian Cameron questioned how long one would wait for the DNA test results to be available as there is a huge backlog of unresolved tests.