Reed dance to go ahead despite fears of clashes 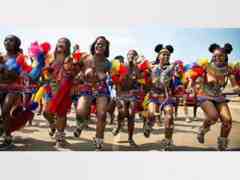 Zulu King Misuzulu kaZwelithini has decided to press on with the annual reed dance this weekend despite fears of violent clashes with the so-called royal rebels.

On Tuesday spokesperson Prince Thulani of eGazini told Scrolla.Africa that no threats will stop the king from hosting the reed dance at eNyokeni Royal Palace this weekend.

The long-awaited ceremony is usually held annually but it was postponed in 2020 and 2021 due to the pandemic.

On Monday Scrolla.Africa reported that Prince Mxolisi kaBhekuzulu, an ally of Prince Simakade, who is challenging the king’s claim to the throne, wrote to Premier Nomusa Dube-Ncube warning of “bloodshed” at the reed dance.

To prevent conflict, he warned, the premier must either call off the annual dance or change the venue from the eNyokeni Royal Palace, where it has been held for the last 37 years.

He warned that they won’t allow the king to host the ceremony at eNyokeni because they don’t recognise him as king and the palace is currently occupied by Prince Simakade.

He said that the king should hold the ceremony at the kwaKhangelamankengana Palace instead.

Prince Thulani said that in light of the letter, the government should provide more security to prevent any violence.

“Let me make it clear that it is all systems go for the reed dance ceremony and it is going to be held at eNyokeni Royal Palace as usual,” he said.

“This type of ceremony always has a huge number of police due to its nature and the number of people who attend it.”

The Zulu throne has been in contention since 2021 following the death of King Zwelithini. King Misuzulu’s coronation has done little to deter his challengers, his brothers Prince Simakade and Prince Buzabazi.

The reed dance is attended by more than 30,000 maidens every year at the eNyokeni Royal Palace.