Residents take crack down on zamazamas into their own hands 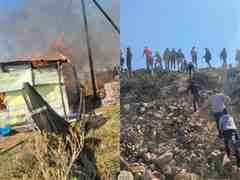 Shacks said to be belonging to zamazamas have been set alight by angry residents in Kagiso. The residents have vowed to rid the area of all zamazamas. MORE ON @ScrollaAfrica pic.twitter.com/LGLCL9xryA

As the protest in Kagiso rages on, residents in Krugersdorp are chasing down zamazamas and taking them to the police station in their private cars.

One zamazama miner was stoned to death by residents on Thursday morning and another five were captured.

A group of immigrants from Mozambique were made to strip naked before residents assaulted them.

Shots were fired from mine shafts and residents who were chasing miners ran for their lives.

Terrified South Africans who were renting out shacks were seen with identity cards in their hands in case they were mistaken for being foreigners.

Residents of the township in Mogale City west of Johannesburg took it upon themselves to hunt down zamazamas in order to assault them.

Carrying weapons like sjamboks, hammers and shovels, residents broke into shacks demanding to see who stayed there and burnt down shacks suspected to be occupied by zamazamas.

Suspected zamazamas were loaded onto bakkies and once the vehicle was full they were taken to the police station where they were locked up.

Protestors shut down Kagiso following the gang rape of eight film crew members last week. Those accused of being illegal immigrants have been targeted by both police and residents.

“This has been a long time coming,” said resident Harry Mohlari.

“Shacks have mushroomed up all over Kagiso. Most of the occupants are miners who mostly come from other parts of the continent.”

Harry believes the Basotho and Mozambicans have been the main culprits responsible for the criminal activities in the area.

“The community is now demanding a mass deportation of illegal foreigners. We don’t want to see them back here,” he said.

“The police have always ignored our pleas to get the illegal miners out of our community. We will continue taking the law in our hands.”

The situation is at the moment very volatile with police helicopters hovering over the abandoned mine shafts. At around midday, a huge police presence had arrived to calm down the situation.