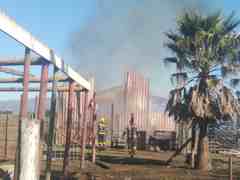 A farm was torched and animals slaughtered and stolen in revenge after its owners’ dogs allegedly attacked and killed a couple in Schaapkraal, Cape Town on Saturday morning.

The couple aged 38 and 39 were walking next to the farm when the two dogs escaped and attacked them.

When the community heard what had happened they went on the rampage, looting everything from animals to building material.

“It was chaos. Chickens, horses, ducks, cows were everywhere running from angry residents with weapons,” said an eye witness.

A resident who asked not to be named said they have been complaining about the dogs to the owner, but he has never taken them seriously.

“The couple were attacked and killed by the dogs outside the farm. That is why the people reacted like that,” said the resident.

By Monday morning residents were still busy taking what was left of the farm.

Another resident said the community should have handled the situation better.

“I know they are angry, but what they did is not justifiable. Now people have lost jobs,” said the resident.

She said some animals were slaughtered inside the farm and their carcasses carried out as some people didn’t want to take live animals.

“Philippi police are also investigating a case of malicious damage to property after the farm property was burnt down,” he said.

No arrests have been made yet, as suspects are unknown at this stage. The dogs were taken away by the SPCA.

The devastated farmer said he was not ready to speak to the media.