Rounding up foreigners is no substitute for proper law enforcement 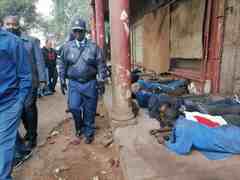 If you are an African male foreign national and still hanging around Krugersdorp, you will most likely be booking yourself a jail cell before the week is over.

As of Wednesday morning, over 120 men from Zimbabwe, Lesotho, Mozambique and Malawi have been arrested following the gang rape of eight women last week.

Not a single one of these men has been directly linked to the crime.

Yes only males, no women, no Asians, no Europeans and no Indians or Pakistanis are being arrested.

And it doesn’t matter whether you have committed a crime or not; you are getting arrested.

If there is no crime that can be proved against you then you will probably be charged for entering the country illegally.

Police Minister Bheki Cele wants scapegoats to blame because the police have failed to protect citizens from being murdered and raped.

Cele wants the nation to congratulate the police for a quick response after the shocking crime was committed.

But it is playing populist politics to blame foreign Africans for every evil and to conflate illegality – not having documents – with responsibility for crime more generally.

Beating his chest Cele listed how the SAPS was quick to respond to the mass killings in taverns in Soweto and Pietermaritzburg.

He used a televised interview on Monday to remind viewers of the effective police reaction to a mass shooting in Khayelitsha in Cape Town, the arrest of suspects linked to the Sweetwaters tavern killing in Pietermaritzburg and the arrest of two men linked to the murder of the mayor of Collins Chabane Municipality in Limpopo.

The swift arrest of over 120 foreign nationals in Krugersdorp forms part of this narrative of “good reaction” by the police.

But why have the SAPS Crime Prevention Units and SAPS Intelligence not done more to prevent the proliferation of criminal gangs? Why do our citizens continue to suffer these sickening attacks?

On Tuesday, five days after the crime was committed, heavily armed cops flooded into Krugersdorp with helicopters in the air. Over 40 men were brought in to add to the 80-plus arrested over the weekend.

It was a massive public relations exercise.

But it failed to answer the real question: why – time and time again – are we closing the stable door long after the horse has run away?