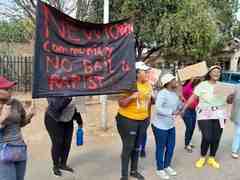 When a pastor was arrested and charged with rape, the community and his congregants wanted to give him a taste of street justice.

The group from the Newton informal settlement raised money among themselves to bail out the pastor.

They prayed that the Mamelodi Magistrate’s Court would grant him bail so that they could “deal with him” themselves.

But the 37-year-old pastor of Jesus the Answer Christian Church was lucky he didn’t get bail.

The pastor was remanded in custody for further investigation until his next appearance in October.

It is alleged that the pastor had been raping a 13-year-old girl for three years.

Athalia Maepa from Ontekane Mogau Children’s Home said the pastor is well known to the community and a close friend of the alleged victim’s family.

Maepa said the girl confessed to a friend that the man of God had been raping her from 2019 and threatened to kill both her parents should she tell them.

Maepa said when the girl’s friend confided that the pastor had also been touching her in her private parts, the two children decided to confess to the girl’s father.

Congregant Bella Manamela said when the allegations spread through the squatter camp, as the pastor’s congregation they had to act.

“We believe the victim and to show our support, we immediately started raising funds for his bail. Residents and us as the congregation want him. We want to make an example of him,” she said.

Manamela said the pastor is a fake. “He is ruining the name of the Lord and bringing shame to the house of the Lord. How will non-believers believe the word of God when a man of the cloth behaves like a pig?”

Resident Onica Madlala said they had raised R3 000 and would raise more if bail was set at a price above the amount they had.

“That fake pastor belongs to us. We will get into debt just to bail him out and beat him to our satisfaction. We are prepared as residents to even borrow money from loan sharks just to bail him. His family must let us have him,” she said.

Not In My Name, an NGO formed to fight gender-based violence, also picketed outside the court.

The group’s secretary general Themba Masango said churches should join them on the picket lines.

“We can’t have churches becoming crime scenes. Women go to church to find solace. It can’t be that pastors become perpetrators and monsters,” he said.