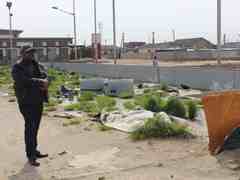 A female football team in Khayelitsha, Cape Town has been forced to suspend training sessions because their field is covered in sewage and rubbish.

Coach of the Resilient and Victorious United Women’s Football Club, Vuyolwethu Kayi, said this happens often and has led to major deterioration of the pitch, as reported in Ground Up.

This means the team can’t prepare for matches as they desperately scout around to try and find another field.

The field was built in 2010 for the Fifa World Cup but funding problems meant that Grassroots, the non-profit organisation that built it, had to hand it over to the City of Cape Town.

Coach Kayi said the issues began once the city began working on sewage in the area nearby.

“The City promised to fix it by the end of July, but nothing has been done,” said Kayi.

Ward councillor Anele Gabuza said the area used to be teaming with children making use of the facilities but those times are gone.

“The sewage causes flooding and damage. This area used to be so beautiful and clean. The soccer field had green grass and fencing and it was used by the youth for their soccer matches. Now there is nothing,” said Gabuza.

“The flooding is as a result of foreign objects in storm water pipes such as clogged sand, stones, garbage and many other objects that block the flow of stormwater,” she said.

Van der Ross said the football field will be replaced once funding becomes available but could not provide an indication as to when that may be.