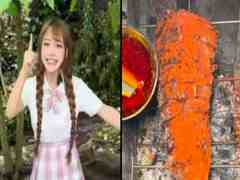 A social media blogger is wanted by Chinese police after posting a video of herself chowing on the flesh of a great white shark, a protected species in China.

Tizi, a vlogger with 8 million followers, says the meat of the shark is very tender.

In a video that went viral on social media, Tizi is seen feasting on the predator which police in China have confirmed is a great white shark.

“It may look vicious, but its meat is truly very tender,” Tizi said while eating the shark that spent some time on the braai.

The video has since been deleted.

Great white sharks are on the list of vulnerable species by the International Union for Conservation of Nature – one step away from being classified as endangered.

Finning and industrial longline fishing has in the last few decades threatened the population of the sea creature.

Great white sharks are listed as protected in China with illegal possession punishable with a 10-year prison sentence.

“It is amazing that an internet celebrity can eat a protected animal in front of millions in broad daylight!” a social media user said.

“These uncultured attention-mongers will stoop very low to make eyeballs turn!” said another.

It remains to be seen whether Tizi will be punished for the video.

She argued that she acquired the animal legally but the local agricultural bureau said on Monday that her argument is inconsistent with the facts which police were looking into.

Dried baby shark flesh is often used in cat food in China and can be bought in retail stores.