Silver for Simbine in scintillating race 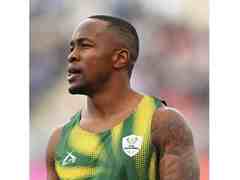 Akani Simbine and Charl du Toit settled for silvers in their 100m finals after two bronze medals were won in cycling and bowls for Team South Africa at the Commonwealth Games on Wednesday.

Simbine, who many had hoped would defend his title in the men’s 100m final, missed out on gold by just 0.11 seconds to Kenya’s Ferdinand Omanyala. The 28-year-old Johannesburg-born star finished in 10.13 after brilliant running in the final few metres of the race to clinch second place.

It was Candice Lill who got Team SA’s medals going on day six after completing an arduous seven-lap course in the women’s cross-country cycling race.

It was also a good day in for Team SA in the badminton singles round of 64 with Caden Kakora winning 2-0 over Falkland Islands’ Ben Chater in the men’s match and Deidre Jordaan beating Uganda’s Justine Naluwooza by the same scoreline in the women’s match.