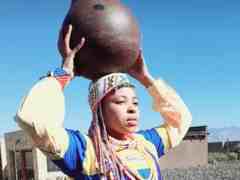 The lead vocalist of a Free State a capella music group was kidnapped and raped at gunpoint after leaving a music festival.

Mamello Mlangeni of the group Tears of Joy was abducted on Sunday as she and a band member were napping inside their car.

Tears of Joy was returning home after performing at the annual Dipontsho Spin Festival.

Speaking to Scrolla.Africa about her ordeal, Mlangeni said it was in the early hours of Sunday morning when she and one member of the group Nako Molapo were kidnapped outside the De Beult Jazz Club by two armed men.

Mlangeni said they were both sleeping in the car waiting for the driver and another group member Qwaqwa Mokoena who had gone inside the club to get a takeaway.

“I thought I was dreaming when I opened my eyes and saw someone pointing a gun at me. They told me to remain quiet and drove off with the car unaware that I was not alone as Molapo was still sleeping at the back of the bakkie,” she said.

The men stopped in the middle of nowhere in the veld and started undressing her. She said she faked being on her period hoping the man would stop but he went on to rape her.

“When the other one saw Molapo at the back, he ordered him to get out of the car but Molapo managed to push him back and we escaped,” she said.

Molapo said the men woke him up and told him to come out of the car. “I heard a voice of a lady saying I am on my period and did not realise that it was Mamello.

“I pushed the guy and ran away. I saw Mamello’s sunglasses and I was wondering how they got there. I was praying she was not dead.”

During their escape they became separated and Molapo went to the Manapo Hospital, “where I was treated for minor injuries”, he said.

Mlangeni said she hid naked in the veld, waiting for the sun to rise so she could get help.

When the sun rose, she said she walked towards the nearest village where she was helped by the community.

Warrant officer Mmako Mophiring confirmed that a kidnapping and rape case was registered at the Phuthaditjhaba police station and added that investigations are underway.

“No arrests have been made because the victims do not know who the suspects are. However, our investigation team is working on the cases,” he said.