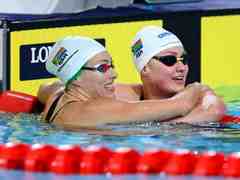 As if Lara van Niekerk winning the gold medal in the women’s 100m breaststroke was not enough to celebrate, Tatjana Schoenmaker finished right behind her in second place.

The teenage sensation Van Niekerk dominated the race from lane four, with nobody coming close to going ahead of her throughout the race.

In a heartwarming display, all the swimmers came together for a group hug at the end of the race before jumping out of the pool.

Van Niekerk was visibly shocked at the result, holding her hands to her head in disbelief that she had just won her second gold medal of the Games.

Following the medal-winning pair, Pieter Coetze took to the pool for the men’s 200m backstroke final.

It was not looking good for the teenager at the halfway mark but he fought back in the final 50m to claim third place and win bronze.

The bronze medal comes as Coetze’s third medal of the Games after winning a gold and a silver medal each.

Chad le Clos was up next and it was not just any occasion, it was a potentially historic one as a medal would have seen the South African become the most decorated athlete in the history of the event.

The 30-year-old however narrowly missed out, touching the finish wall in fourth place by the narrowest of margins.

Le Clos was only 0.21 seconds off making history. The question is now whether he will be back in four years time?

The first medals of the day for South Africa came in the lawn bowls event with the team of Johanna Snyman, Esme Kruger, Bridgit Calitz and Thabelo Muvhango coming away with the silver medal.

South Africa now has a total of 16 medals at the Games comprising six gold medals, five silver medals and another five bronze medals.