Superstar cricketer Lizelle Lee was dumped for being too heavy 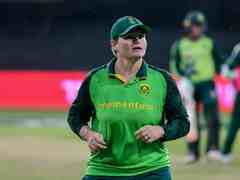 The sudden announcement that Proteas women batter Lizelle Lee was retiring came as a shock to cricket lovers – especially as the 30-year-old stepped down while in the middle of the tour of England.

Now Lee has revealed that she retired after failing a weight test.

Lee was named the leading women’s cricketer in the world in April. She was also named the best women’s one-day international cricketer for 2021 in January.

Cricket South Africa (CSA) confirmed that Lee could not take part in the white-ball matches against England after failing a workload and fitness test.

“I know I don’t look like an athlete but that doesn’t mean I can’t do my job. I looked like this last year and I had a brilliant year,” Lee told the BBC World Service’s Stumped podcast.

Lee said that she didn’t feel good about herself.

“Every time I’m in the South African camp, it’s always about my weight. Emotionally, it breaks a person down. I don’t even look at myself in the mirror any more,” she said.

Despite CSA requesting that Lee return for further testing, she felt the organisation was targeting her weight rather than her fitness.

“I told them you’re dropping me because of the way I look and how much I weigh. They said ‘no we’re dropping you because you failed the fitness battery’,” Lee said.

“But if you break it down, I made the fitness but I didn’t make my weight, so they’re dropping me because of my weight. As a woman, that breaks me. It’s probably one of the toughest things to hear, saying you’re not able to play for a team because you weigh too much.”

CSA told Lee that she had to do the tests or else she could be denied a no objection certificate which allows her to play in domestic leagues around the world.

Lee added that before failing the test, CSA never helped her with losing the weight and it was only after her announcement that the governing body offered her a support programme.

Lee does not see a way back into the national team unless things change within the management staff.

“I think management needs to be changed. A few people need to change, there has to be fairness across the board,” she concluded.