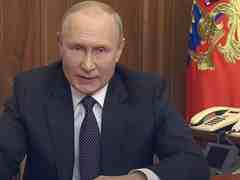 Russians are reportedly racing to flee the country after President Vladimir Putin announced that he would be calling up 300,000 reservists to fight in the country’s ailing invasion of Ukraine.

One-way plane tickets out of Russia sold out hours after Putin gave a televised speech on Wednesday announcing the country’s first mobilisation since the Second World War.

In his speech, he also implied that he would be willing to use nuclear weapons if Ukraine continued counter-offensives against Russia. He warned western nations not to get involved, saying “This is not a bluff”.

It was Putin’s second threat of this kind since the invasion began on 24 February; he placed Russia’s nuclear deterrence force on high alert days later, but the nuclear option was not mentioned again – until now.

Civilians in Russia are now scrambling to escape the war, with Google data showing that it would currently cost almost R870,000 to fly a family of three from Moscow to Johannesburg.

Google searches for “how to leave Russia” also reportedly topped the search engine’s traffic in the hours after Putin’s speech aired.

The invasion of Ukraine has been a military, political and economic disaster for Russia.

Things turned from bad to worse at the end of August when Ukraine’s military commenced counter-offensives against Russia’s beleaguered forces – which have been largely successful.

Putin’s speech will be seen as a desperate attempt to regain control of a war that he himself waged, and which he is now decisively losing.