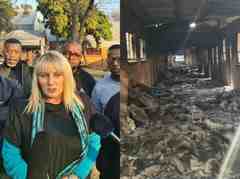 The executive mayor in the city of Ekurhuleni, Tania Campell, has estimated the damage caused by this week’s disturbances in Tembisa at R35-million.

This doesn’t include the loss of lives of four people.

Touring the township on Friday to survey the damage the mayor appealed to the community not to damage infrastructure as it is there for their benefit.

The Community Civic Centre was totally destroyed. Through the locked gates one can see the ashes of the centre, burnt cars and wreckage.

Pensioners are now having to wake up early in the morning to queue up in Germiston, 40 min (33,8 km) from their township, to receive their old age grants.

Security was high for Campbell who defied warnings on social media for her not to enter the township, including threats that she would be petrol bombed.

The streets of Tembisa were calm on Friday. There is a movement of people and motorists are once again able to drive without being told to go back or held up for cash by those taking advantage of the unrest.

The mayor said she was taking time to meet the residents “because I had to come up with concrete solutions to their grievances,” she said.

Residents of Tembisa have been complaining about the high electricity and water tariffs.

Organiser of the march and chairman of the Tembisa Community Forum Zamani Sithole said: “It is regrettable that the end result of the protest was damage to the city’s infrastructure.

“It was not in our plans to damage anything during our protest. It happened because you cannot control people’s actions when they are protesting,” he said.

He said the mayor has promised that temporary service centres will be erected in the township. “We have another Tembisa service number two in the Winnie Mandela section.

“People of Tembisa will get their services in Tembisa,” said Zamani.