The Games reach their climax 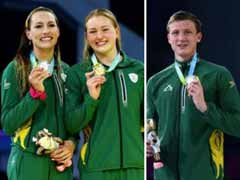 PICK OF THE SPORTS: In what has been an action packed two weeks, the Commonwealth Games reaches its final few days.

➤ It has been somewhat of a roller coaster ride for Team South Africa at the Games. While they have won 20 medals thus far, six of them gold, it is no longer possible to match the 38 medals won at the last games.

South Africa will walk away from the event proud that the teenage talents of Lara van Niekerk and Pieter Coetze were showcased in the pool.

Tatjana Schoenmaker once again demonstrated the talent that will win her medals for plenty of years to come while Kaylene Corbett also showed she is one to look out for in the future.

Any hopes of improving the six gold medal tally for South Africa firmly rests in the hands of the netball and cricket teams.

Both sides will be in action throughout the weekend with the hopes of making it to their respective finals on Saturday.

All the Commonwealth Games action will be live across several DStv channels with the main events of the day shown on channel 201.

➤ There is no bigger event in world rugby than when the Springboks take to the field against the All Blacks.

It’s a rivalry that dates back just over a century.

The All Blacks are currently ranked fourth in the world – their lowest ranking ever – and South Africa are second behind Ireland. But rankings mean very little when the Springboks and the All Blacks come face to face.

The first of two matches on South African soil kicks off this weekend at the Mbombela Stadium in Nelspruit.

Kickoff for the mammoth clash is set for Saturday at 5pm, live on DStv channel 201.

➤ League football is back and the world feels right again!

Both the English Premier League and the DStv Premiership kick off this Friday in a most exciting day for football.

Bar the start of a Fifa World Cup, the opening day of the domestic league is unlike any other

– the uncertainty, the excitement and the nerves all come together to provide an unforgettable experience.

Crystal Palace start the season with a fixture against Arsenal on Friday night with the first ball of the season being kicked at 9pm on DStv channel 203.

In local football one of the best fixtures on the calendar kicks off when Cape Town City host Mamelodi Sundowns.

The two sides arguably provide the best entertainment throughout the year and face each other to kick the league off in a match that’s going to be a fireworks display.

The first game of the DStv Premiership season kicks off at 7.30pm on Friday night.

Get yourselves strapped in folks, it is going to be one crazy weekend of sport.