The Premier League is back! 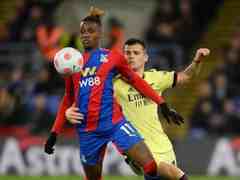 The big kick-off is finally upon us with football’s greatest league set for another season of gorgeous goals, restoked rivalries and a thrilling title race.

At 9pm on Friday 5 August when Crystal Palace host Arsenal, the Premier League will be well and truly back!

The early start to the new campaign comes as a result of a mid-season Fifa World Cup, which will bring a halt to proceedings from the second week of November up until Boxing Day.

The winter break could very well tilt the title and top four races one way or the other, with players like Mohamed Salah and Erling Haaland getting a vital period of rest, compared to the likes of Harry Kane, who will have to lead their countries out under pressure.

Regardless of this, it is probably safe to say that Manchester City and Liverpool will be in and around the top two, barring any serious upsets.

Pep Guardiola and Jurgen Klopp’s sides have looked miles ahead of their opposition in recent times; and who knows? Perhaps we’ll have another final day cracker on our hands.

In terms of the battle for European places, the gap between third and sixth place is likely to be much less than last season’s 16 points.

Meanwhile, the likes of Manchester United will definitely want to improve on their points tally from last season, as the Big Six go neck-and-neck for the crucial top four places once more.

A new season also means three new clubs; and this time around the league will welcome back Fulham, Bournemouth and Nottingham Forest as the promoted clubs. Which of them will impress the most, perhaps even upsetting the big clubs?

The relegation battle will immediately have the three new sides looking behind them, as well; and Bournemouth’s lack of signings in the market may have them as one of the unfortunate favourites to face the drop.

The luck at the back end of last season may not be as kind to the likes of Leeds United and Southampton this time, though, meaning that a good number of teams will be fully focused on the 40-point target for survival from the onset of the new campaign.

The top goal scorers’ list will also be something to keep an eye on. Will Salah and Son continue from their hot form last season or will the new boys Haaland and Nūnez have something to say about it?

Keep an eye on Gabriel Jesus in new colours over at Arsenal, while Raheem Sterling under Thomas Tuchel could see the Englishman have more minutes and flourish in his new shade of blue.

Tactical master classes could well be the order of the new season with Tuchel’s back line being zoomed in on after some changes; and Klopp and Guardiola now having more scope for rotation with five substitutes being allowed.

What more is there to look forward to? I guess we’ll just have to sit back, relax and enjoy it all unfold. Scrolla.Africa, as always, will bring you all the coverage from football’s greatest league.

Image source: The Will Nigeria