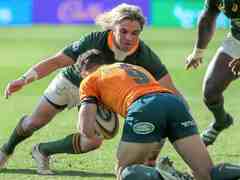 This weekend one of the most controversial rugby series comes to a close and it couldn’t be more exciting if it was a movie script.

All four teams, Argentina, Australia, New Zealand and South Africa, can statistically still win the Rugby Championship. And all four teams have had their ups and downs so far. It will always be a joy to remember Canan Moodie jumping to snatch the ball away from Marika Koroibete’s grasping hands and scoring a runaway try.

Who can forget Eben Etzebeth making devil-eyes at Allan Ala’alatoa, Faf de Klerk rearranging Nic White’s moustache, Makazole Mapimpi organising Koroibete’s beard? Sadly, we remember Michael Hooper’s decision to come home, and not so sadly we remember Elton Jantjies’ decision to leave the team with a bang (so to speak).

Was Michael Foley the flyhalf of the championship or was he the clown who cost Australia a famous victory?

And how fate has dealt Springbok fans an unfair blow! Do you cheer or groan when your mother-in-law drives your brand new car over a cliff? If Nic White guides Australia to victory over New Zealand will we cheer or groan?

It is hard to imagine Australia beating the All Blacks at Eden Park but a Wallaby victory would certainly help the Springbok cause. However, if the Kiwis win with a bonus point, that will make the South African challenge somewhat more daunting. And it is good to remember that Argentina never runs onto a rugby field to lose.

Either way, as the game in New Zealand happens some eight hours before the game in Durban, the task will be clearly defined for the Boks.

As things stand at the moment the only difference on the scoreboard between South Africa and New Zealand is in the points difference, where the Kiwis have a 13 point advantage.

Jacques Nienaber has already said that his team is training for a bonus point victory – which means they must win by three tries more than Argentina and score 13 points more than the All Blacks score against Australia.

Whatever the permutations, South Africa is in it with a real chance – very possibly even as favourites.

Nienaber has gotten away with a few “interesting” decisions. He insisted on a 6/2 split on the reserve bench that blew up in his face – twice. He got away with Joseph Dweba in the run-on team – twice. Damian Willemse’s injury has left a huge gap. Is the coach going to get away with demeaning the position of fly-half?

The one thing about Frans Steyn at flyhalf that is a major, possibly decisive factor, is that he won’t panic. Bank on him to play the very best game he can. Whether that will be good enough remains to be seen.

Of course, anybody who watched the Pumas-Springboks game until the end with Steyn’s conversion kick right from the touchline, the ball gaining altitude as it sailed through the uprights, will once again have marvelled at that man’s ability to kick the ball. It may just make a difference on Saturday.

But what if Steyn has to be replaced? It doesn’t matter how often you check the list of the reserves, there is not a single flyhalf there. Not one.

Yet, Nienaber laughs it off. During the week he again referred to Faf de Klerk as “somebody who can play flyhalf”. Yes, we know that. Faf can and does play every single position including referee, and all in the same match. But he is not a flyhalf. Jacques Nienaber, you have gambled again, and we all hope it works. There’s a lot at stake.