Truck drivers stuck at the border attacked by thugs 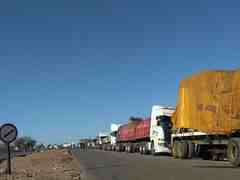 With Transnet Freight Rail not operating, truck drivers held up at the borders have become easy targets for criminals.

The truck drivers get stuck at the Komatipoort Lebombo border gate for days and sometimes for weeks while transporting coal, iron ore and manganese to Mozambique from all over the country.

Drivers told Scrolla.Africa they are also forced to relieve themselves at the side of the road and suffer in the truck cabs due to the extreme heat.

They said criminal gangs mostly from the small town of Ressano Garcia just across the border in Mozambique have targeted them on the highway in the last year.

“We have asked for patrol teams to operate 24 hours a day,” said trucker Bongani Nyundu.

“We need the protection not only at the Lebombo border post, but also on the N4 where truck drivers are queuing.”

He said this year alone more than ten freight truckers have been robbed and harassed. Some have been killed.

Driver Vusi Nyathikazi, who is transporting coal from South Africa to Mozambique, said they are on their own from 7pm to 6am.

“We queue from the petrol station and it’s dark. We don’t have access to toilets so we have to relieve ourselves in the bushes next to the road,” he said.

“Now there are too many trucks delivering to Mozambique causing us to wait for days. We are not safe. This has been like this since January, but it has been worse since last month.”

The queue heading to the Lebombo border post is about 16 kilometers long, forming double lane lines all the way from Malelane to the border.

Some freight truck drivers use the Tenbosch road to get a better position in the queue.

The lack of 24-hour operations is the most significant barrier to border crossing. Crossing times have increased since 2019 from about an hour to more than 20 hours.

Resident Gugu Ngwenya said their roads have already been damaged as a result of reckless driving by trucks transporting tons of coal and goods.

“Going to Komatipoort is difficult for us and now that December is approaching it’s going to be even worse,” said Ngwenya.