Why NDZ is a serious contender 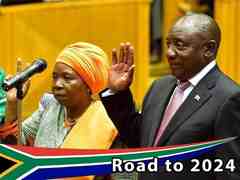 Road to 2024: Nkosazana Dlamini-Zuma’s star has been quietly rising in the ANC for some time, writes Zukile Majova, and Ramaphosa would do well not to underestimate her.

Anyone thinking of dismissing Nkosazana Dlamini-Zuma’s bid for the position of ANC president is making a big mistake.

Dlamini-Zuma lost to President Cyril Ramaphosa in the 2017 elective conference by just 3.8% of the popular votes in a conference of 4,776 delegates.

In the run-up to that conference, Ramaphosa had spent far more than Dlamini-Zuma on T-shirts, organising rallies, fancy accommodation and pay for lobbyists as he was armed with a R300 million war chest, according to his submission to the Zondo Commission on State Capture.

At the time Ramaphosa was seen by ANC delegates as former president Nelson Mandela’s original choice of a future president.

But despite all this, Dlamini-Zuma received 2,261 votes compared to Ramaphosa’s 2,440 votes.

Since then, Dlamini-Zuma’s star has been rising, having led the government’s strategy to respond to the Covid-19 pandemic.

She is also one of the few senior ANC members not implicated in the state capture report or in corruption being investigated by various agents of the state.

The 73-year-old is expected to rely on the backing of the ANC Women’s League which is demanding that three women should be elected to the ANC Top Six.

As a candidate of the so-called Radical Economic Transformation faction in the ANC, she is expected to rely on the support of KwaZulu-Natal and the Free State.

In the latest development, the ANC provincial executive committee in Mpumalanga appeared to be ready to join forces with the ANC in KZN.

The leadership structures of the two provinces met in Durban to “map the road” in preparation for the ANC’s 55th conference.

Dlamini-Zuma’s campaign for high office dates as far back as 2007 when she contested the position of deputy president as part of a Thabo Mbeki slate that lost to former president Jacob Zuma’s slate.

Those lobbying for Dlamini-Zuma say she is far more experienced than Ramaphosa, having been chairperson of the African Union Commission.

Her experience includes being Minister of Health (1994), Minister of Foreign Affairs (1999), Home Affairs Minister (2009), Minister in the Presidency (2018) and Minister of Cooperative Governance and Traditional Affairs from 2019.