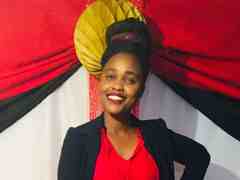 Sisters Nomvuyiso and Abongile Dorotile never went anywhere without telling each other. So when Nomvuyiso couldn’t get hold of her sister on Sunday, she sensed something was wrong.

She went to Abongile’s shack in Enkanini in Khayelitsha, where the 35-year-old Abongile lived with her boyfriend and their four-month-old baby, Ivakele.

Only the boyfriend was home, and he said he didn’t know where she was.

37-year-old Nomvuyiso returned to the shack on Tuesday morning. This time the boyfriend wasn’t home so she decided to look around the shack, hoping to find a clue to help her find her younger sister.

Instead, she made a grisly discovery. She found Abongile’s lifeless body under a blanket. Her baby boy was nowhere to be seen.

However, the police disagreed, finding “no signs” that Abongile had been murdered when they arrived at the scene after Nomvuyiso called them.

She now fears that her nephew Ivakele must have been kidnapped.

“We started going door to door in our neighbourhood asking if they had seen anyone carrying the baby, but we were unsuccessful.”

No one had seen or heard anything about the child. The family believes Abongile was murdered and her baby stolen by her murderer.

One neighbour said she last saw Abongile on Sunday morning. She was babysitting Ivakele and Abongile had come to fetch him.

Harare police spokesperson Captain Siyabulela Vukubi said they registered an inquest docket since there were no signs that Abongile had been murdered.

“It was also established that she had a four-month-old baby who is allegedly missing. Police are still searching for the baby,” Vukubi said.