Woman handed to wrong parents as a baby compensated with cash 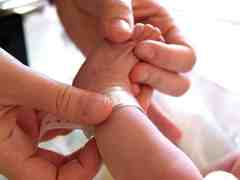 An Italian woman has received R8.8 million in compensation after the hospital she was born in gave her to the wrong parents.

Antonella’s biological mother spotted a photograph on Facebook of a baby that looked just like her and decided to pursue the baby behind the photo.

When the pair met up and took DNA tests Antonella found her real mother and then took legal action against the hospital.

The 33-year-old received the payout in a civil case in the city of Puglia in the south of Italy.

“Antonella could have grown up with her real parents, who owned a business, in a stable, well-off home but missed out on all that and has really suffered,” her lawyer, Salvatore Pasquadibisceglie, said, The Times reported.

“They delivered ten minutes apart, both by caesarean section, and it is possible the two babies were mixed up right there in the operating theatre. As they were not wearing identity bracelets, a nurse may have swapped them by mistake as they were being kept in cots in the ward,” Pasquadibisceglie said.

Antonella was taken home by the wrong mother, Loreta, who put her through a terrible childhood with a violent father who abandoned them.

Loreta left Antonella behind, handing her to the care of her grandparents, who put her into a care home before she was adopted at the age of 15.

The truth came to light in 2012 when her biological mother Caterina saw a photo of Antonella posted by Loreta on Facebook.

“It’s a small town so people know each other,” Pasquadibisceglie said.

“Caterina saw an incredible likeness of herself, and, knowing that Loreta had given birth at the same time grew suspicious, contacted Antonella and proposed a DNA test.”

The other baby that was mistakenly handed to the wrong mother is also seeking damages, claiming they too endured a difficult upbringing.

“She was quite a character and had a turbulent relationship with her parents before getting married at 18 and leaving home,” Pasquadibisceglie said of the child.